Our AGM will take place on-line on the 21st of March this year, the same way as last Fall.
Obeying the meeting restrictions in effect, this event will be held by means of video-conferencing. Members who do not have the necessary resources to join the video-conference can participate in person at OHCC within the limits of health safety measures. We ask these members to notify us in time by any means available to them. 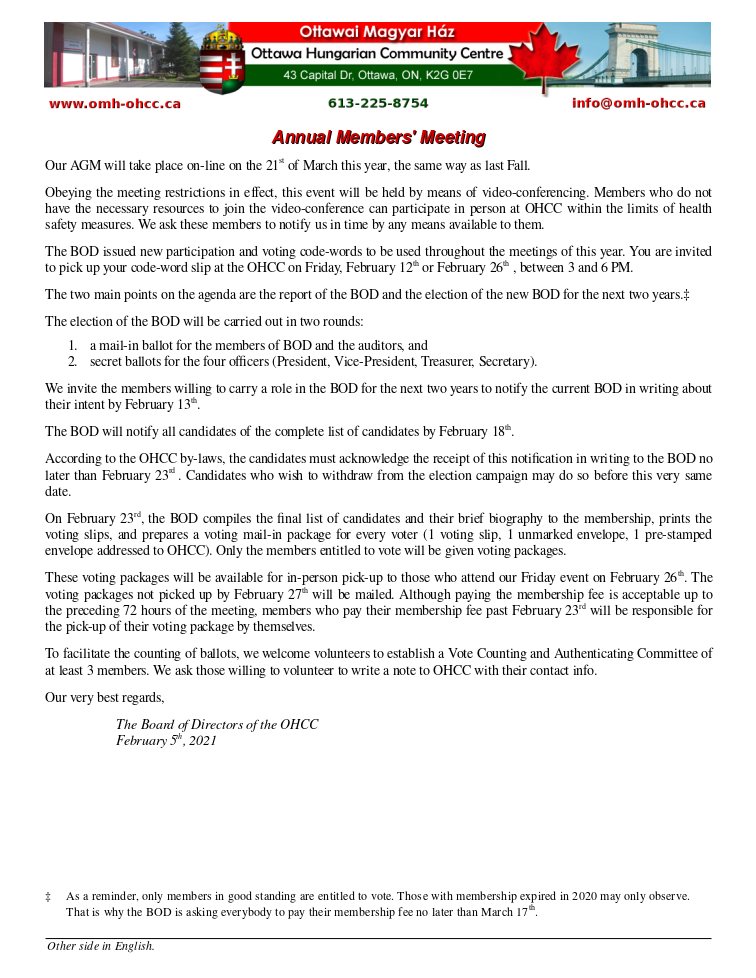 The BOD issued new participation and voting code-words to be used throughout the meetings of this year. You are invited to pick up your code-word slip at the OHCC on Friday, February 12th or February 26th , between 3 and 6 PM.
The two main points on the agenda are the report of the BOD and the election of the new BOD for the next two years.‡
The election of the BOD will be carried out in two rounds:
1. a mail-in ballot for the members of BOD and the auditors, and
2. secret ballots for the four officers (President, Vice-President, Treasurer, Secretary).
We invite the members willing to carry a role in the BOD for the next two years to notify the current BOD in writing about their intent by February 13th.
The BOD will notify all candidates of the complete list of candidates by February 18th.
According to the OHCC by-laws, the candidates must acknowledge the receipt of this notification in writing to the BOD no later than February 23rd. Candidates who wish to withdraw from the election campaign may do so before this very same date.
On February 23rd, the BOD compiles the final list of candidates and their brief biography to the membership, prints the voting slips, and prepares a voting mail-in package for every voter (1 voting slip, 1 unmarked envelope, 1 pre-stamped envelope addressed to OHCC). Only the members entitled to vote will be given voting packages.
These voting packages will be available for in-person pick-up to those who attend our Friday event on February 26th. The voting packages not picked up by February 27th will be mailed. Although paying the membership fee is acceptable up to the preceding 72 hours of the meeting, members who pay their membership fee past February 23rd will be responsible for the pick-up of their voting package by themselves.
To facilitate the counting of ballots, we welcome volunteers to establish a Vote Counting and Authenticating Committee of at least 3 members. We ask those willing to volunteer to write a note to OHCC with their contact info.