A part of the proceeds willbe used to support the Hungarian minorities in Transcarpathia.

Besides the greatest classical pieces, Felicián’s concert encompasses movie soundtracks, folk songs and compositions of his own.

Everything he plays is soaked with his own characteristic style which opens the heart towards classical music with ease.

Felicián guides his listeners into and through a very colourful musical world. He combines the classical and electronically generated sounds and elements effortlessly, and he always brings his cello in the forefront at the exactly right time.

During summer of 2018 his very first album entitled “Great Great Grandma” appeared revealing his daring adaptations of well known Hungarian folk song motifs. The motto of the album is: “My great-great grandmother’s songs in my world”. 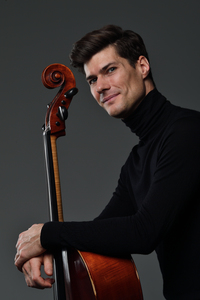 Felicián Kalmus „… was born in Hungary, and started playing the cello at the age of five. Over the next few years he won many competitions, and played his first solo concert with the symphonic orchestra at age of eight. Felicián graduated from the Ferenc Liszt Music Academy (Budapest). He began performing many of his own compositions during his time at the academy, and is known (in Hungary) as the crossover cellist. Felicián has been featured on several CD-s, film and advertisement musics. Has been working with highlighted Hungarian artists. Meanwhile currently playing in two bands, he is focusing on his crossover solo performance as well as on his #randomcello project.” [https://feliciankalmus.com/hu/]

We can only guarantee the seating for reservations received in time, and dining is by reservations only. Please make yours by 9 PM on Friday prior to the event. Reservations successfully submitted through the web are confirmed by e-mail as well.